Madeleine Lenagh has lived in the Netherlands most of her adult life. A writer and photographer, I’m delighted to welcome her as a guest on the Expat Files. ““““““ 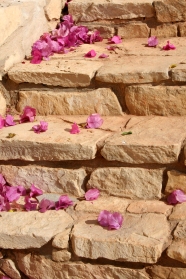 What would it be like to live in Portugal? (Photo by ML)

I never consciously decided I was going to spend the rest of my life in the Netherlands. Even after having lived here for 20 years, somewhere in the 90’s I found myself toying with the idea of moving back to the States. During visits to the UK or Portugal I would wonder what it would be like to live there. 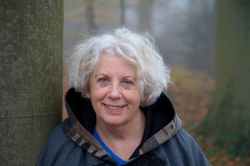 And, after visiting New Zealand in 2009,  I came back convinced that the South Island would be a great place to grow old.  My son frowned,  “You wouldn’t see your grandchildren grow up.”   I sighed; he was right.

Coming from a nation torn apart by internal strife, in the early 1970’s, the Netherlands was about the sanest place I had ever seen. Protesting students were not tear-gassed into oblivion or shot to death. Their demonstrations actually resulted in university reforms. City streets were safe for pedestrians and cyclists. Everyone had access to proper medical care and there were no signs of poverty. I wanted to stay for a while and see for myself how this worked.

“Staying for a while” stretched out, on and on. In my autobiographical book, Passage of the Stork: Delivering the Soul, I describe settling down, raising a family, becoming active in local politics, and building a career in urban development and project management.

With chameleon-like versatility I learned to speak fluent Dutch and recognize the subtle rules of social engagement. I tried to curb my American tendency to talk about myself. Sometimes I succeeded. However, my ease at speaking in public and acknowledging my achievements, did not always trigger admiration among my new friends. It was often frowned upon, I was seen as an arrogant American.

And, above all, I was incapable of learning how to ride a bicycle properly. After wobbling along with a toddler in the front basket and grocery-bags in back, almost getting hit by a truck was the final straw. The Dutch may have been born on a bicycle, I certainly wasn’t!

One of the important themes in my book is this process of understanding who I am at the core of things. Understanding why some people view me differently than I perceive myself. Another important theme is about developing a sense of belonging somewhere, putting down roots

One thing became clear to me. I had grown up in the woods of rural New England and had spent much of my childhood on or near the sea. I’m not an urban person. 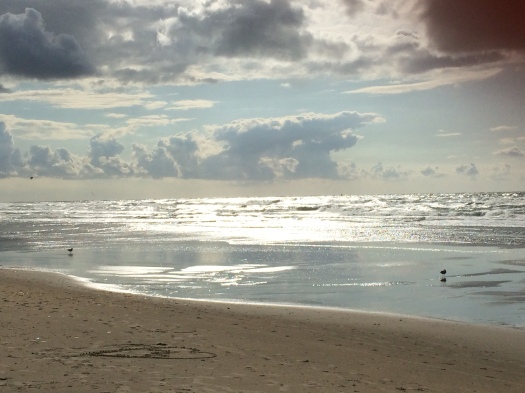 “She will always love the sea.” quote from Passage of the Stork: Delivering the Soul. (Photo ML )

So, after 30 years in the charming but very urban towns of Haarlem and Utrecht, I moved out to the Dutch countryside. It was still a compromise; neatly tended fields are a far cry from the wild remote places I love, but the vistas are beautiful and my garden is filled with birds and other wildlife.

Sunrise from my house (Photo ML)

I left my work in project management and opened a practice for life-coaching and counseling. From my clients I learned that feeling displaced can also happen to people who have lived in the same town their entire lives. It’s a sense of not feeling at home in the life you’re leading. Many people make their life choices based on what others expect of them. They are not doing that which makes them happy. The ensuing sense of displacement can lead to restlessness, addictive patterns, and/or depression.

I started doing the things that make me happy: photography, writing, traveling. I stopped dreaming of a better life in a different country. I started paying careful attention to my natural surroundings. Like a great tree, I learned to put down roots.

A great tree (Photo by ML)

A lot of expats become chameleons – to blend in to their surroundings – and later wonder about their identities, but Madeleine notes it can be a common experience regardless of where you have lived. Can you relate? Do you have any comments or questions about her life, her book or anything at all?