California has been in a drought since 2011.  The 2018-19 rainy season has finally lived up to its name however and the drought is declared over.  There was decent rain in 2017, but a drought is gauged not only by the amount of precipitation, but also the snowpack, soil moisture, stream flow and how full the reservoirs are….
To me it also means a bountiful wildflower season.

This wild mariposa lily was a new find.  A rare native limited to small area in southern California. Yet we found them blooming by the dozens on a little patch in the Santa Ana Range west of Lake Elsinore. They were just waiting for the last 8 years for the rains (I’m not kidding).

Those who live in southern California have heard of the super bloom at Lake Elsinore. Unfortunately 100s of thousands of people from LA and other nearby cities went to see. Thus we didn’t stop-  it doesn’t make for a very wild experience if you are sharing it with crowds.  We could see the California poppies covering the hills above the freeway in the distance, however I didn’t take a photo as it was too hazy.  Here is one of many photos, posted on the internet,  I disapprove of – a couple sitting on the flowers: 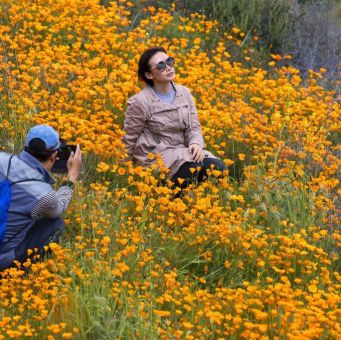 So many people trampling the flowers. Over the weekend California officials declared an emergency due to the massive influx of visitors at Lake Elsinore and shut down the parking and freeway access!

But let me leave you  with one more photo of Calochortus catalinae. The male anthers are diagnostically pink – in contrast to other mariposa lilies. (“Mariposa” means butterfly.)

We are in route to the desert of Anza Borrego: my next post.