The Amazon deforestation, the oceans, droughts, famines, fires, pollution, endangered species… I could write a blog on each of them. They are all linked to something few seem to talk about these days: Overpopulation.  Is this such a moral landmine that we ignore it – to our peril?  Population multiplies all of these problems.  The current global population has crossed 7.7 billion and is heading upward; growth is exponential as are the demands  our limited resources: water, land, trees, food and fossil fuels.

Here’s what Jane Goodall has to say:

Mitigating population growth would have more impact than virtually any other climate policy! Women, given the resources and the choice, will opt for smaller families. Let’s promote female empowerment, especially in the developing world. Reproductive rights are an environmental as well as a social issue.

Let me end with some pictures of our beautiful world.

A planet worth saving.

Last year California had record breaking fires – that record held for almost 100 yrs. Now we’ve broken last year’s record for the most destructive fire ever. Normally we would have had rains by now and “fire season” would be over – and acres of land and homes – not to mention lives, would not have been lost. We haven’t had any rain since early spring and the land is very dry. ( In October, San Francisco had weeks of temperatures breaking 80 degrees and in November it was in the 70’s – until the fires darkened the skies.)

Plume from the Camp Fire in Butte Co. on Nov 9.

Another larger view from NOAA shows the plume covering an extensive region and shows the Woolsey Fire in southern California as well. (I can’t find a date on this image, but it was 2-3 days later).

The town of Paradise is Paradise no more, in fact very little is left of it. People have died and many more are homeless in this area… because of global warming. Think about that.

Although we live 180 miles south-southwest of the big Butte Co. fire, we are being advised to stay indoors with windows closed. Public schools are closed from Butte Co to well south of  San Francisco; even the Cable cars shut down, as we now have the dirtiest air in the world. The skies vary from hazy to a dirty orangey color and are predicted to continue this week to plague us.

We can hardly see our nearby hills where my husband hikes almost every day. Today they have “disappeared.” (photo taken 2 days ago)

It has been 8 days now since that fire started (there are others). Yesterday it was announced it was only 40% contained; today they say they are making progress.

In the first days, the sun’s rays were sometimes bent to cast an unusual gold-red glow that was ironically pretty. It reminds me of the shadows we saw during an eclipse. Smoke particles filter sunlight, scattering short wavelengths and leaving the longer reddish wavelengths of the light spectrum behind. This allows more orange and red colors to pass through the smoke. 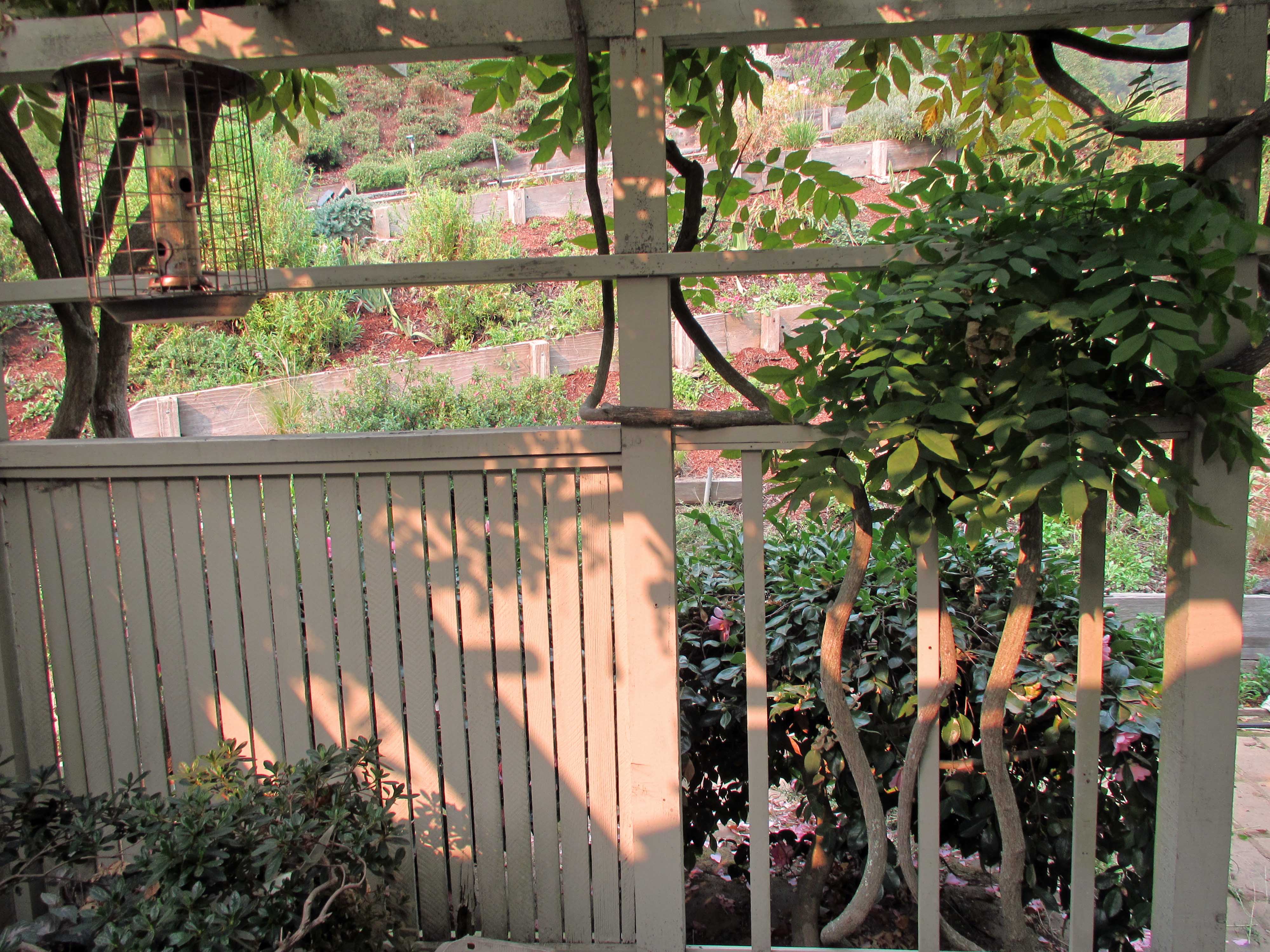 I have a cough and sore eyes, but the bigger picture is… that smoke is coming from people’s lost homes. There are horror stories of people running from the flames into swimming pools and creeks, but you read the news. My heart goes out to the thousands affected.

Waterfall in a Rainforest

I grew up overseas, first as an “air force brat” and then as an (embassy) attache’s daughter. We lived in Europe and Latin America and after college I moved to New Zealand.  So you can see why I am attracted to various cultures and settings.  These places have beautiful natural scenery and fostered my love of nature and inclination for conservation.

When I was a kid, my father told me  “they will never conquer the jungle.”  He was a pilot and this was after yet another fruitless search and rescue mission for a plane that went down somewhere in the tropical forests between Costa Rica and Panama. I wish they had found the plane, but I also wish he had been wrong about de-forestation.

I remember flying over emerald forests in the 1960’ and 70’s that looked like endless crumpled velvet. Thankfully half of Costa Rica’s existing forest cover today is under the protection of national parks or biological reserves, but 80% of their original rainforest was already gone over 15 years ago.  The primary cause of deforestation was cattle ranching. (You’ve heard of the “hamburger connection”?)

Brazil and Colombia are the two most biologically diverse countries on Earth due to the Amazon rainforest.  The Amazon is the largest rainforest in the world covering over a billion acres (stretching into parts of Ecuador, Peru and Venezuela as well).

Colombia lost 30% of their forests to diverse causes – ranging from logging, mining, development of hydro-electricity,  agriculture to cocaine production. The primary cause of deforestation in the Brazilian Amazonas – like in Costa Rica – was cattle ranching.

Most of the pictures in the slide show above( unless they have my initials) come from people who share their wonderful photos on Pinterest (for more see www.pinterest.com/CindaMac/ ). This is a rehash of a post I wrote over two years ago when I first started this blog. I figure I can do this as most of you who now follow this blog didn’t “know” me  back then. (And I hope those of you who did and do won’t mind – at least there are new pictures!)   Still valid today.

Many acres of land in the California deserts and environs are covered in solar panels and wind farms.   Green energy – win- win right? Not so fast; there are a few factors to take into consideration. Do I dare play devils’ advocate here? Environmentalists are finding themselves in the awkward position of having to choose between clean energy and conserving fragile arid ecology . 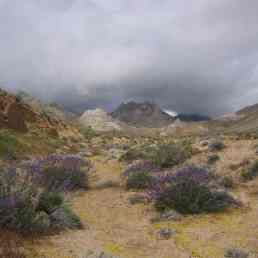 Short Canyon before a thunderstorm

In spring – however in a few short weeks the color will disappear.

Just as wetlands and marshes were considered useless swamps to be filled and “reclaimed” decades ago, deserts are often viewed as worthless land. In fact many desert areas are surprisingly pristine, supporting a unique and delicately balanced ecosystem, and paving them for development or solar panels is a mistake, especially when already-disturbed sites exist as alternatives. I  can’t understand why rooftops and existing infrastructure are not being considered as the first option; an advantage to siting near electricity users is the reduced need for new transmission lines and the decrease in energy lost in transport, both of which reduce costs. I’m looking into solar panels on our roof now that it is economically viable. Utilities however aren’t keen on buying electricity from their customers – they want the energy and the cash to flow in the other direction.

Solar panels put to good use. 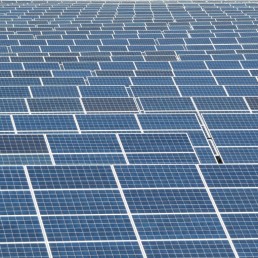 Not so good when they cover acres of land.

Carrizo Plains, just northwest of the Mojave Desert is one of the sunniest places in California and thus exploited by the solar power industry. While not really a desert in itself, it is an arid environment with an average elevation of about 2,200 ft (700 m).   No trees grow there and the annual rainfall is less than 9 inches (230 mm) per year.

It did support ranches back when ranchers regularly moved herds between these winter grazing areas to the higher, cooler slopes for summer. 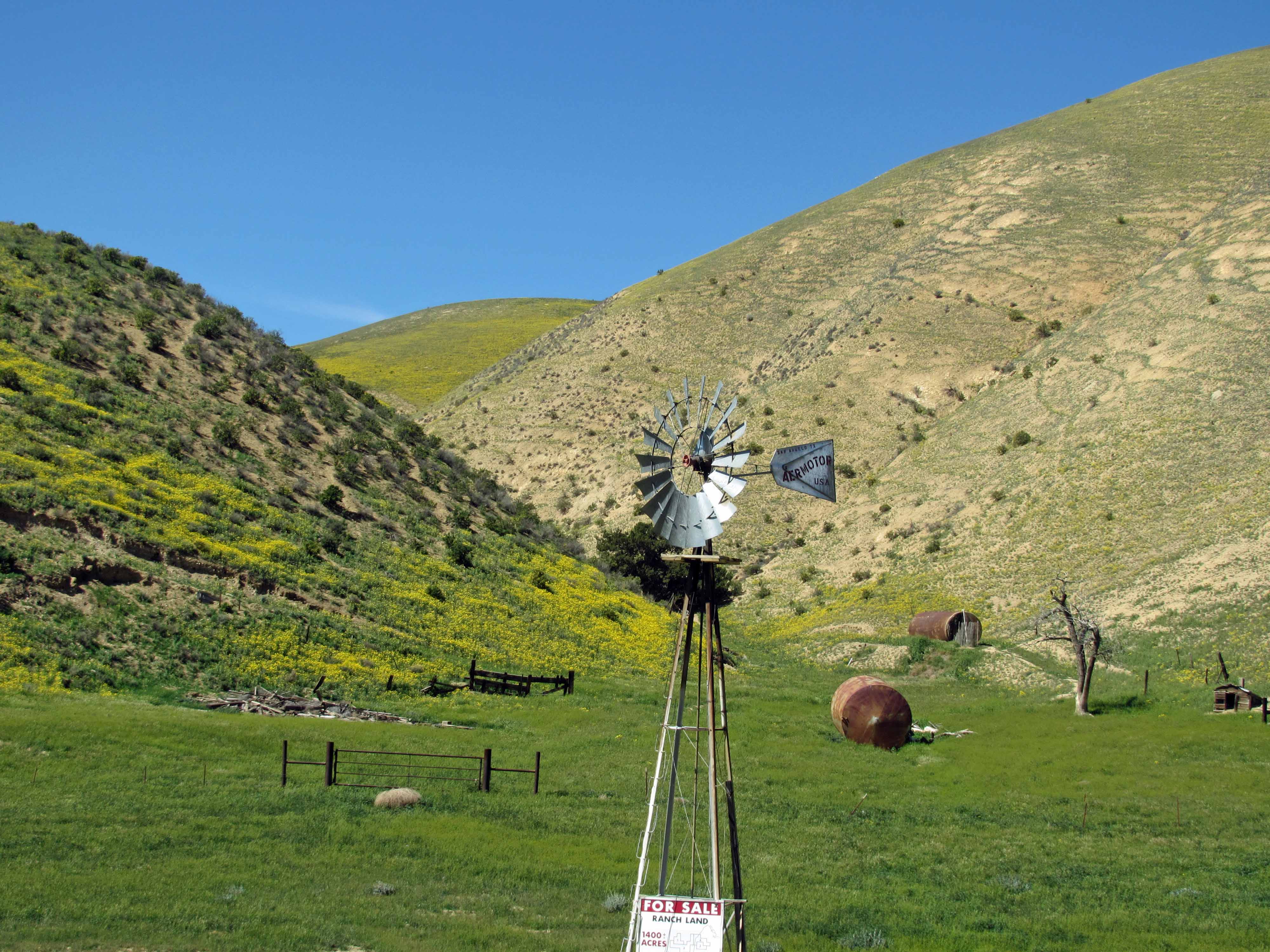 This ranch has water – the old windmill is still working. Note the for sale sign – land has become more valuable over the years.  (Although one realtor’s ad, showing pictures like these, failed to mention how miserably hot and dry the summers can be.)

If you look closely, beyond the old ranch shack  (below) you can see a dark line in the distance which is part of a solar farm. Those are tumbleweeds in the foreground.

Soda Lake a 3,000-acre (12 km2) ephemeral lake lies in the middle of the plain; the creek draining into Soda Lake is dry most of the year. The lake itself is often gone by mid-summer, but this year due to the drought, it was already dry when I visited in early April . Normally it attracts migratory birds, but they had to fly farther to find water the last two winters. A dazzling white crust is what remains from the evaporation of mineralized water.

Soda Lake(dry)  and the Carrizo Plains in the background.

The Carrizo Plains is home to astonishingly diverse communities of wildlife and plant species. 13 different species are listed as endangered, the largest concentration of endangered species in California. The desert tortoise is one; other species include the pronghorn antelope, Tule elk, burrowing owls, coyote, desert cottontail and the San Joaquin kit fox. 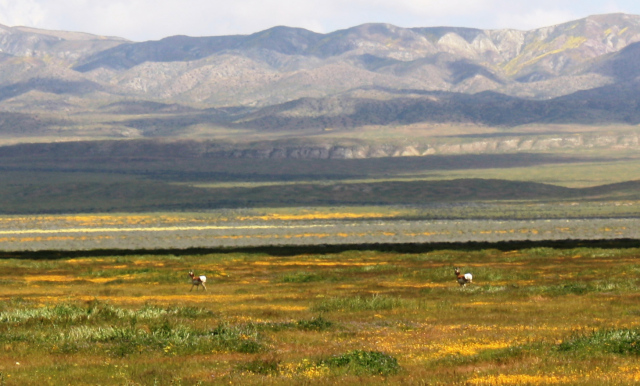 Because of this biodiversity, it has been called the state’s Serengeti. The site is famous for its spring wildflower displays and the largest native grassland surviving in California. (From a personal standpoint I already miss the wildflowers that have been lost to acres of projects.)

Disclosure! All of the photos in the slide show below were taken in spring when the desert and surrounding areas are looking their best.. Most of the flowers last only a month… or two if there is spring rain. Southern California (really most of California ) gets the bulk of rain in the winter; showers the rest of the year are rare and fleeting.

The Carrizo Plains became home to the largest photovoltaic array in the world in the 1980’s when Arco bought 177-acres (0.7 km2) of ranchland. Another solar farm was constructed by Ausra on an adjacent 640 acres. Neither were able to compete with fossil fuels, but as solar recently became economically viable, a third party Topaz Solar, bought Ausra and minimized the use of land. Topaz began operation in November.

above:Topaz Solar Farm from space Earth Observatory image, 2015 (on Wikipedia).  Below, an aerial  shot of another solar farm, this one in the southern Mojave Desert. 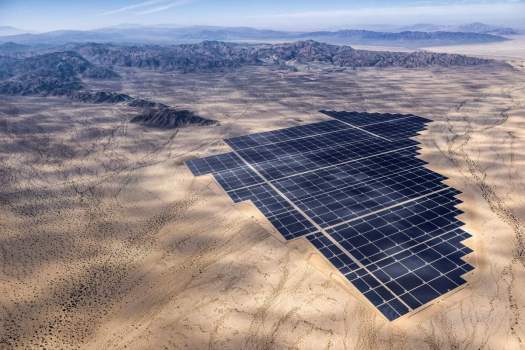 The sheer size of these projects results in habitat loss and fragmentation making it more difficult for wildlife to find food, water, shelter, mates, and protection from predators.   During and after construction the area becomes a dust bowl due to removal of vegetation. Solar projects have also been criticized for killing large numbers of migratory birds coming south for the winter. Some crash into the reflective panels they assume is a body of water. Others birds are burned to death in midair, along with insects and hundreds of butterflies, by the scorching CSPs (Concentrated Solar Power).

Wildlife and plant life everywhere are already affected by climate change so the destruction of vegetation and habitat is a major impact, important for us to minimize and mitigate. One way would be to develop renewable energy projects on already disturbed or degraded lands like brownfields, abandoned mines, or landfills.

We need to encourage the development of green energy, but not view it as a panacea. (I haven’t researched wind power, but it also takes up huge amounts of land and kills an astounding number of birds.) There is no free lunch. Everything is a trade-off and must be considered carefully to weigh the best options.

What do you think? Where do you stand? Have an opinion? Weigh in!