York, situated in northeast England, can keep you delightfully occupied – a history buff needs more than a couple of days (which alas was all we had). It is home to the largest medieval church in northern Europe, the Minster, as well as the longest circuit of medieval city walls.
We’ve seen a lot of churches (really… another one?) but this may well be the most beautiful and certainly the grandest. We were able to attend an evening song and a kind resident invited us to sit in his box with him: “best seats in the house.” The gentleman said, “Just kneel when I kneel and stand when I do and you’ll be fine.” 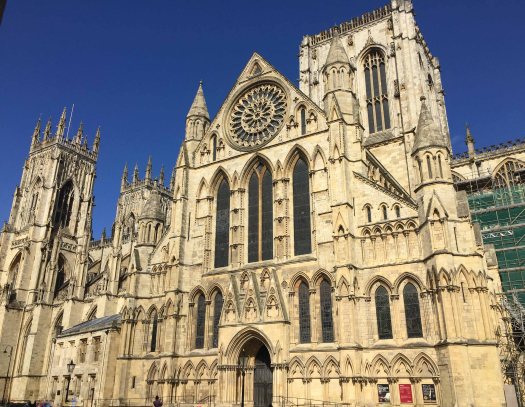 The Gothic cathedral was built in the 13th century and boosts impressive stained glass windows. An exquisite Rose Window commemorated the union of the royal houses of Lancaster and York, through the marriage (1486) of Henry VII and Elizabeth of York, which ended the Wars of the Roses and began the Tudor dynasty. 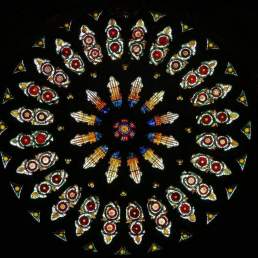 The Wars of the Roses were a series of battles fought from 1455 to 1485 between the Lancasters and the Yorks…both belonged to the House of Plantagenets (albeit different branches) and both laid claim to the throne. The wars ended with the defeat of Richard III of York, by Henry Tudor (father of Henry VIII) who united the Yorks and Lancasters by marrying Elizabeth of York

(who Phillipa Gregory made even more famous in her book “The White Princess”).

We stayed near Bootham Bar (gatehouses are called “bars” here – as in “bar the way”), one of 4 or 5 ancient bars one must pass through to enter the medieval web of narrow streets composing Old Town York.

Bootham Bar – an entrance to Old Town and stairs to the city walls.

York is a warren of medieval streets like this with narrow alleys called “Snickelways” to explore.

You can climb up the stairs of a bar to get on the 13th-century city walls. …. A magnificent circuit  nearly three miles long with marvelous views of the city.

After walking the wall we descended at Micklegate Bar near the estate called Gray’s Court, built (on Roman ruins) by the first Norman Archbishop of York in 1060.  It has been continuously occupied and renovated in the centuries since. They were booked well in advance so we could not stay here, but we treated ourselves to afternoon tea. 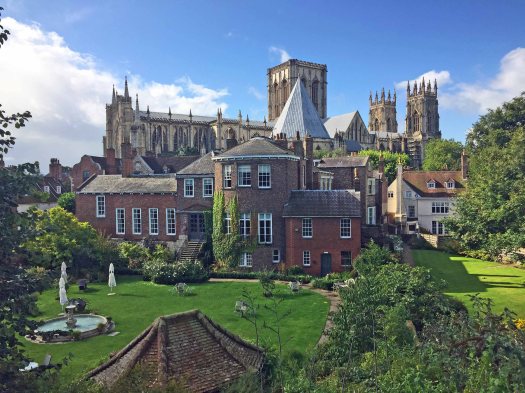 Grey’s Court as seen from the city walls with the Minster looming behind it.

Afternoon tea is served on three tiers of plates with small sandwiches, scones and sweets in this lovely setting. Enough for a light and lovely lunch (especially if you’ve had a British breakfast earlier!).  We did this in the Lake Country and will be having it again! 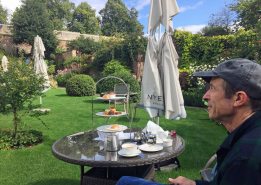 Tom enjoying our tea-lunch in the garden.

Three tiers of goodies – almost half eaten before I stopped for the photo!.

If we had more time we would have boated along the River Ouse. But it was a lovely few days as is. Have you been here? Next week: Bath and the charming Cotswolds – the train leaves for Bath in the morning! (And then maybe I’ll get back to the themes of “writing, expats, and nature” or even Colombia… I am a bit eclectic I guess.)

Leave a Reply to Much ado about Little Women Cancel reply