The other day I interviewed Cinda MacKinnon, author of A PLACE IN THE WORLD, the passionate story of a young biologist struggling for survival in the cloud forests of Colombia during a very turbulent time.  On her blog she explores Colombian culture and the rain forests in addition to inviting fellow ex-pats to share their experiences – fascinating stuff!  Aside from being an author, Cinda is an environmental scientist who holds an MS in geology.  More importantly she’s the owner of the world’s most wonderful dog, Gaston.

I’ve known Cinda for many years and during that time she’s refused to age, still lovely as the proverbial breath of fresh air and just as delightful.   I’ve never seen that lady in a bad mood. Wait a minute.  What’s up with that?  Writers are supposed to be moody and often depressed.  Not to worry, loyal readers, I’ll definitely delve deeply into this deviance from the writerly norm ; )

We decided to use the interview as an excuse to have lunch together at Siam Orchard, a popular Thai place .  After getting our orders, Cinda spoke about what inspired her to write A PLACE IN THE WORLD. 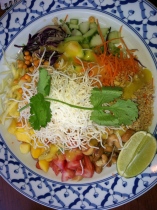 CM: I grew up without a place where I felt I really belonged.  My father was in the foreign service and we moved a lot but spent most of our time in Latin America.  So, I know what it’s like feeling stateless. That’s why once my heroine found a place she loved she insisted on staying there, despite the difficulties, and making it her home.

JT: A PLACE IN THE WORLD is set in the cloud forests of Colombia near where you lived as a child.  To me, cloud forest suggests elves and talking trees. What sort of enchanted beings or plants would one expect to find in a cloud forest?

CCM (chuckling):  Well, let’s see – no elves that I’ve seen, but there are jaguars, capybaras and quetzals.  The jaguar are beautiful animals, frightening but magical in their own way and the capybaras are unique because, well, I don’t  think they live anywhere but in South American.

JT: What is a capy…?  (JT stumbles with the pronunciation)

(Click here to check out a hysterical video of a singing capybara.  A giant rodent singing opera? That’s definitely magical.)

CM: The quetzal?  It’s the most fascinating bird on earth.  It has iridescent emerald feathers, a red breast and tail feathers this long (Cinda indicates an arms-length.) The Mayans used to collect its feathers believing they had magical powers.

The Quetzal “Just a gorgeous bird”  Look at those tail feathers!

JT: How about legends and myths?

CM: The myth of El Dorado (the Golden One) comes from Colombia.

Centuries ago, before the Spaniards arrived, the Indian ruler (El Dorado) – as a part of an annual ritual – covered himself in gold dust and then the Indians took him on a raft to the middle of a lake and he stepped into the water and washed the gold dust off. His followers then threw gold and other offerings into the “sacred” lake. When that gold was discovered years later it prompted the legend. (JT: For more about El Dorado click here.)

Then there’s the legend of Salto Del Tequendama, a beautiful 550-foot waterfall near Bogota with a tragic history.  During the Spanish conquest many of the indigenous people thought the only way to escape being made a slave was to throw themselves from the top of the falls. The legend was that halfway down they’d magically transform into eagles and thus could fly away to freedom.

(From JT: For more about  Salto Del Tequendama and its Haunted Hotel, check this out: http://eyesoncolombia.wordpress.com/2010/06/13/tequendama-falls-the-haunted-hotel/  It’s fascinating and on my bucket list.)

Ok peeps – that’s all for today.  Next time, Cinda discusses what bewitched her upon returning to the states (even though it mortified her husband), the hamburger’s sinister connection to the rain forests,  and why you may want to re-think ordering fish in Bogota.
Stay tuned!

One thought on “Cloud Forests and Capybaras”

LeWhy don't these Spam messages from OUtlook go to a spam folder? If I blacklist "outlook" will it take out real followers?ave a Reply Cancel reply